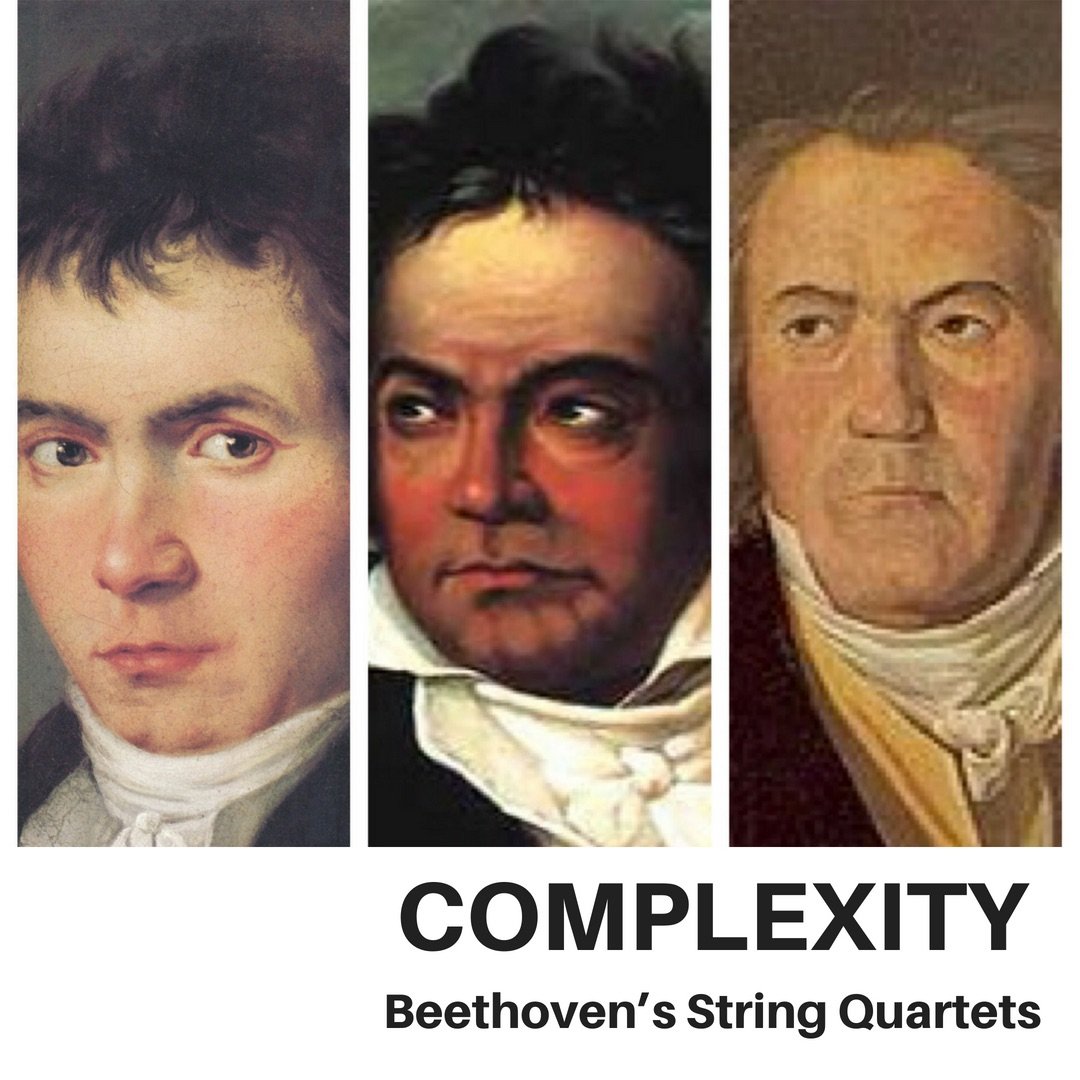 Of the six quartets in Op. 18, Ludwig van Beethoven (1770-1827) composed the G Major Quartet first chronologically. However, he then spent much time revising it. In musical sketchbooks from 1798-99, Beethoven extensively and laboriously worked out four of the quartets. The earliest is the D Major, making it his first completed mature string quartet.

As in his Symphony No. 1 (from the same general period), Beethoven introduces musical uncertainty right from the first notes, and that sets the tone for the entire first movement. In the graceful first theme group, instead of comfortably establishing the home key, the composer gives us a plethora of notes ornamental to the underlying harmony. Classically, the second theme group should be in the key of A major, but Beethoven takes us to the “wrong” key of C major for the first part, then jerks us into A major with two or three assertive chords. In the development section, he goes even further by clothing much of his thematic material in unaccustomed minor keys. What might be an otherwise routine recapitulation is spiced considerably by splashes of the minor mode and remote keys, notably E-flat (!) only moments before the movement’s ending.

Maintaining character, Beethoven leaps into the key of B-flat major for the Andante movement. The music begins in a serene mood, then runs a gamut of emotions that show Beethoven writing from the heart (rather than by form) with remarkable maturity. Against the music’s pulsating continuity, the individual instruments often take on special characteristics, becoming almost like players in a drama.

Again foreshadowing the First Symphony, the Allegro third movement is a true Beethoven scherzo — essentially a minuet at breakneck speed. The high spirits in the outer sections contrast with the Trio, where the violins conduct a whirlwind dialog in the minor mode.

In the finale, Beethoven whips up the scherzo’s joviality into a frothy lather of triplet notes and jabbing accents. As in the first movement, the underlying harmonies run far afield at times. Despite this Presto’s near-perpetual motion, a few definite themes emerge, notably an idea that reminded one annotator of the “Mexican Hat Dance.” However, Beethoven — always full of surprises — ends this otherwise boisterous and bombastic movement with the quietest of low whispers.

Between 1806, when Beethoven finished his three “Razumovsky” Quartets, Op. 59, and 1810, when he dashed off the “Serioso” Quartet in one month, the composer wrote little chamber music. A cello sonata (Op. 69), two piano trios (Op. 70), and the Op. 74 string quartet are the tally. During this time, he was deeply occupied with such matters as the Fifth and Sixth Symphonies and the last two piano concertos, to name only a few of the projects. Personal problems involving, finances, health, deafness, love, and family life also beset the composer at the time. We are not surprised, then, that he was at turns despondent and angry, and that he should express these feelings in his most intimate medium, the string quartet. Of the “Serioso” quartet, analyst/philosopher Joseph Kerman writes:

. . . This is first and foremost a problematic work which thrusts in the direction of eccentricity and self-absorption. But Beethoven at his most quirky is Beethoven possessed. In this quartet, and in none of the others so far, he evokes that almost tangible sense of the artist assaulting a daemon of his own fancying. . . .

The F-minor Quartet is not a pretty piece, but it is terribly strong — and perhaps rather terrible. . . . The piece stands aloof, preoccupied with its radical private war on every fiber of rhetoric and feeling that Beethoven knew or could invent. Everything unessential falls victim, leaving a residue of extreme concentration, in dangerously high tension.

Kerman uses the word “concentration,” and we might paraphrase that with the word “compression.” For the individual movements of this quartet are among the shortest Beethoven ever wrote in this medium. And just as air heats up when compressed, so does Beethoven’s music. The first movement, for example is dominated by the opening five-note motive. Though he does introduce other ideas, this brusque idea recurs often, virtually etching itself on our ears. The form of the movement, too, is compressed. Ignoring the usually obligatory repeat of the exposition, Beethoven plunges into a compressed development after just one hearing. Then, the recapitulation is a compressed version of the already terse exposition. Finally, the coda concentrates on the five-note motive, gradually grinding it down dynamically from a pounding fortissimo to a whispering pianissimo.

Beethoven named this quartet “Serioso” himself, and nowhere in it is the description more apt than the second movement. With melancholy concentration, the composer introduces a fully harmonic opening paragraph. We find no prettiness here, nor in the middle section, which starts as a fugato on a new idea. This dissolves into a wispy episode. Then another fugue begins on a new theme, but now the first fugato theme joins in: a double fugue! (The careful listener will also hear the original theme occasionally turned upside down.) After a reprise of the opening paragraph, the music becomes quiet, only to be shaken by the forcible opening of the third movement. The movement would be the “scherzo” (scherzo = joke), but this music is no laughing matter. In Beethoven, anger and determination are often indistinguishable, and this is one of those times. The recurring Trio section offers some emotional relief, but the persistent main idea always hammers away afterward.

The brief Larghetto introduction to the finale bespeaks tragic introspection, but it leads to music that comes off like a quick waltz. This not a merry waltz, however, but a passionate and driving one, much like the breathless finale to the “Appasionata” piano sonata (also in F minor, incidentally). By contrast, the major mode coda at the very end could be taken as some kind of joke on Beethoven’s part. Having been dubbed a “comic-opera” ending, it is almost as if Beethoven thought, “Whoops, we’d better give them a happy ending.” Whether we take the music this way or, more nobly, as proof of the composer’s belief in an indomitable human spirit, we come out with positive feelings.

The string quartets and Grosse fuge of Opp. 127-135 were the last music penned by Beethoven, and if the early and middle works of Beethoven were often misunderstood in their day, the final ones were a complete enigma. The unusual qualities of these works were so alien to early audiences that many listeners ridiculously considered the quartets to be either the absent-minded doodling of a once-great master in his dotage or the work of a man so totally deaf and out of touch with musical sound, that he could no longer distinguish consonance from dissonance — even on paper!

The truth of the matter is that the last quartets are transcendental. They transcend the standards of form, harmony, and chamber technique as they were known at that time. A mystical quality also pervades the quartets, which Aldous Huxley used symbolically in his novel, Point Counter Point. Then there is the matter of technical difficulty. Never a composer to compromise, Beethoven’s grand visions infused his last quartets with a multitude of transcendental difficulties in rhythm, ensemble playing, and pure endurance.

Beethoven opened this final chapter of composition with the E-flat String Quartet. When he received the commission in 1824, about 14 years had passed since he had composed a quartet, the F Minor, Op. 95 (“Serioso”). The new work was very different, however, and unique for its songlike qualities. One writer has even called it “a kind of Lyric Suite [by Alban Berg] before its time.”

The material and extremely plastic structure of the opening movement certainly support that idea. Introductory material recurs during the movement, and there is a free flow between themes and chief sections.

Following an unusual harmonic opening, the slow movement proves to be the extended lyrical centerpiece of the entire quartet. Here is a set of six variations on a long-lined theme, luxuriant in harmony yet vibrant in its rhythms and variety of ideas.

The Scherzo is similarly a full-length essay, but one dominated by the puckish, four-note motive announced in the cello at its beginning. The Presto Trio section literally skims along, and Beethoven brings back a taste of it as part of the coda.

The finale recalls much of the singing Allegro quality of the first movement and its structure is every bit as compact. A lucid modification of rondo form, the movement finally melts into the sweep of triplets that drive the final coda to a brilliant close.