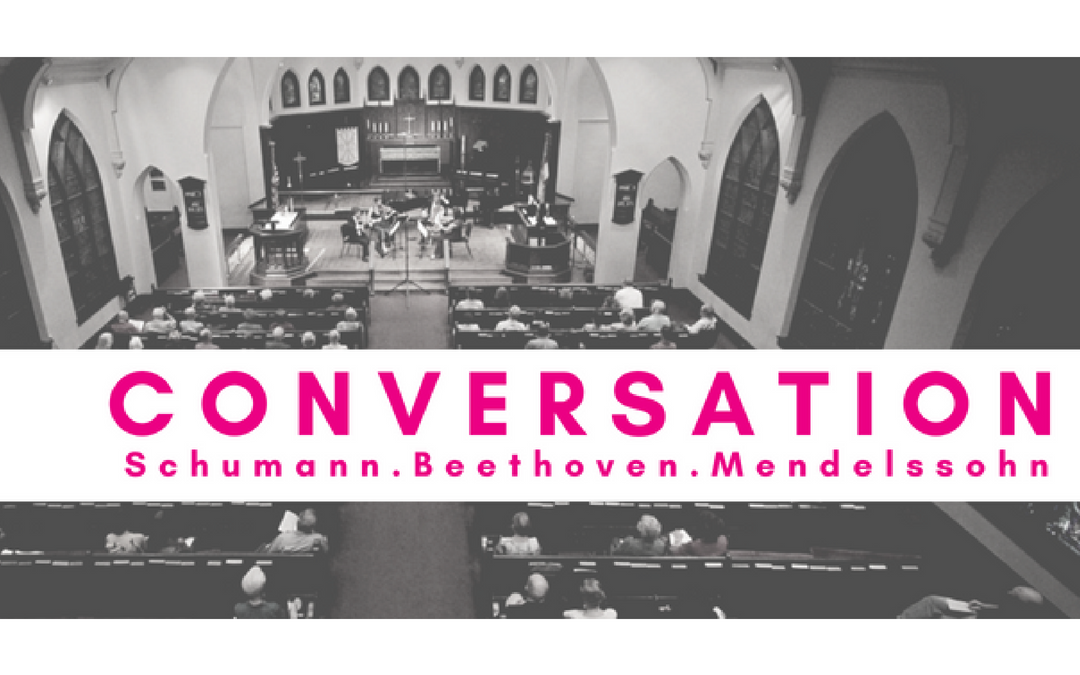 “The week opened with an extraordinary season opener by Camerata San Antonio…Pianist Viktor Valkov joined Camerata string quartet regulars Matthew Zerweck (violin) and Ken Freudigman (cello) in music by Schumann, Beethoven and Mendelssohn. The performances were consistently taut, red-blooded, muscular and huge, the kind that grabs you by the throat and doesn’t let go till the end.”

Would someone please round up the members of Camerata San Antonio, lock them up in a room, and not let them out until they’ve recorded the whole damn cycle of Beethoven’s 16 string quartets?

The notion first occurred to me in March of last year, when the foursome delivered a stunning account of the “Great Fugue” in its original context as the final movement of the Quartet in B-flat, Op. 130. Then the first of the three “Rasumovsky” Quartets (Op. 59,No. 1, in F) closed Camerata’s Feb. 18 concert at the University of the Incarnate Word, and the impression was confirmed. Feral and untethered, but also warm and sweet, and always in motion, this was among the most Beethovenian Beethoven performances in my experience, whether live or in recordings.

We’ve been privileged to hear many of the most acclaimed globe-trotting string quartets over the years, thanks to the San Antonio Chamber Music Society – and even more privileged to have Camerata San Antonio’s core string quartet in our midst, playing for us several times a year. These folks can go toe-to-toe with the best – violinists Anastasia Parker and Matthew Zerweck, violist Emily Freudigman and cellist Ken Freudigman.

Camerata’s program on Nov. 5 held the sole string quartets of two French masters, Gabriel Fauré and Claude Debussy, and by the French-influenced Spaniard Joaquin Turina. The Fauré was especially welcome: Composed just before he died in 1924, it is one of his finest achievements, an engrossing essay in slippery tonality, dense textures and complex counterpoint.

The performances were consistently vigorous, unified, smartly detailed and sonically lustrous. But most impressive was the ever-clear sense of direction, the inexorable momentum that carried the listener from start to finish, especially in Fauré and Debussy. The Turina piece, with one foot in Spanish folk idioms and one in Debussy, and a bit of Chausson for good measure, was less amenable to a clear arc, but still pleasurable.

The recording equipment visible at this concert emboldens us to hope that Camerata will release a recording of the Fauré and Debussy quartets, at least.

Only one minor complaint: Either the electronic enhancement in the University of the Incarnate Word’s concert hall was set too high or my ears were temporarily hyper-sensitive.

Three worthy concerts in two days: On Oct. 1, Camerata San Antonio brought back pianist Viktor Valkov to join its excellent string quartet…Camerata San Antonio opened its season in the University of the Incarnate Word concert hall with a program of Brahms, pseudo-Brahms (Carl Frühling) and something completely different, Entr’acte (Minuet and Trio) (2011) for string quartet by the American composer Caroline Shaw, the youngest-ever winner of the Pulitzer Prize in music, in 2013.

“Landing on an impossibly distant planet, we hear a sound. It roils and hammers, winks and scowls; it ensnares us in nettles, entangles us in vines, sets us afloat on a cloud; it waits, becalmed, then coils and strikes. Could this be music? Or is it some other mode of being, a shape-shifting life form, existing only in dreams?

We have arrived at Planet Beethoven, specifically at two of the weirdest, wildest, most unnerving soundscapes ever conceived – the Piano Sonata No. 29 (“Hammerklavier”) and the Grosse Fuge, in its original context as the gargantuan final movement of the String Quartet No. 13. Both are in the innocent key of B-flat. Careful! The fruit punch has been spiked with Everclear.”