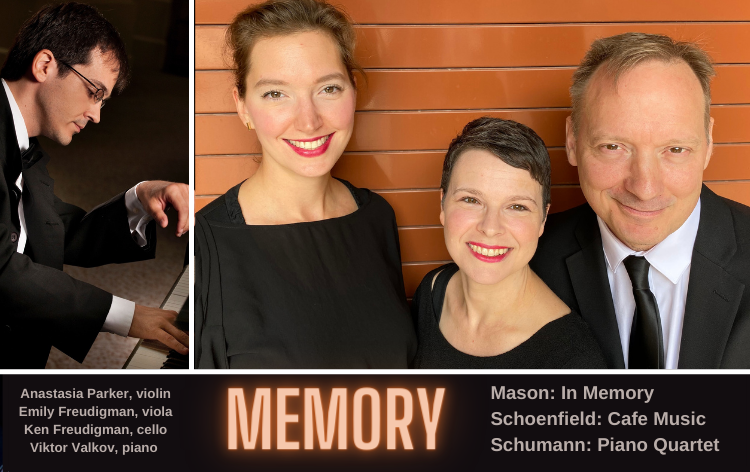 This piece wasn’t written about a specific time or person. It is meant to be a contemplation of memories past, which could be anything the listener/player desires – the viola acts as the voice that recalls these memories and reflects on them with tranquil, yet occasionally tumultuous introspection. Thus, this composition can speak to and work in any occasion.

Paul Schoenfeld (1947- ) is an American composer-pianist active also in Israel. Educated at Carnegie Mellon and the University of Arizona, Schoenfeld has concentrated much of his attention on piano music and chamber music involving the piano. He writes in a virtuoso style with fast tempos and complex textures. One writer has called his music “frenzied,” and the composer himself has remarked that his “is not the kind of music to relax to, but the kind that makes people sweat; not only the performer, but [also] the audience.”

In an effort to explore his Jewish roots, Schoenfeld has become interested in folk music, particularly the folk music of past Jewish settlements in Eastern Europe. (These were also sources for the musical Fiddler on the Roof.) The instrumental music of this culture is called “Klezmer” with a constantly evolving repertoire largely made up of dance songs for weddings and other celebrations.

Schoenfeld’s Café Music is heavily influenced by both the Klezmer tradition and American jazz of the 1920s-1930s — and this is a fascinating fusion. The first movement blends jazzy themes, ragtime rhythms, and the wildly virtuosic style of Klezmer bands, playing at breakneck speed most of the time.

The second movement is what might be called “low-down” in the blues tradition. Sad and blue, the music is nonetheless partially parody. Choosing a minor key, Schoenfeld also recalls the laments of Ashkenazic Jewish peoples — and this style dominates the second half of the movement.

Again frenetically energetic, the third movement launches as a more classically oriented piece. Here and there we hear snippets of Gershwinesque jazz, yet the dance-style underpinning is clearly Klezmer. The only breaks we have from this emotional frenzy are occasional smooth passages in a quasi-Impressionistic style. By the end, Café Music has been quite a ride in a unique blend of Old World and New World musical styles.

During his most productive periods, Robert Schumann (1810-1856) frequently composed clusters of works of a single musical type. In his “chamber music years” (1842-43), for example, Schumann wrote all of his string quartets and several works for piano and strings. During a particularly creative two-month period, Schumann “invented” the piano quintet by composing his E-flat Piano Quintet, Op. 44, also completing the Piano Quartet, Op. 47, in E-flat as well. Each of these works required only five days to sketch and another two weeks to complete. Both were written between October and November of 1843.

In this music, the relationship of piano to strings is sometimes unbalanced. Unlike the lighter piano parts in works by Beethoven, Mendelssohn, or Brahms, the piano is king with Schumann. Listeners may even have the impression that the E-flat Quartet is an extension of Schumann’s solo piano music, since the strings so often double the piano part or oppose it as a block.

In its brief sostenuto introduction, the Piano Quartet’s first movement gives us a small variety of mood snapshots, followed by the Allegro’s first theme, which Schumann presents in three distinct characters. All of them are “with energy and passion,” as Schumann’s directions indicate. The central development offers more cheerful/heroic moods and musical working-out. Before we know it, the principal music returns, abbreviated, and the movement ends in a bright, brave gesture.

The quartet’s Scherzo follows. Here is a perpetual-motion “Wild Horseman”-style opening, giving way to a graceful dialogue between piano and strings. The “Horseman” re-appears to mark the conclusion of this exciting music.

The strings take the spotlight at the opening of the Andante. Then, the piano takes over with an “endless” melody, leading to a full-ensemble texture that seems to speak directly to the heart. The central section is a waltz-dialogue for strings with lilting flourishes from the piano. A cello solo is especially attractive, leading to the movement’s quiet, polite ending.

Counterbalancing the Quartet’s opening movement, the finale introduces a powerful fugue-like main theme. A smooth, but exciting section follows, and then we are back to the fugue, which now introduces a heroic-quality section that builds in excitement. The movement’s central section is smoother and more relaxed, though the tempo is still fairly fast. In several short segments, this music showcases all instruments. The fugue idea returns, now fragmented and developmental. In the final section, each instrument has a brief opportunity to show virtuosity, followed by a powerful, percussive conclusion.