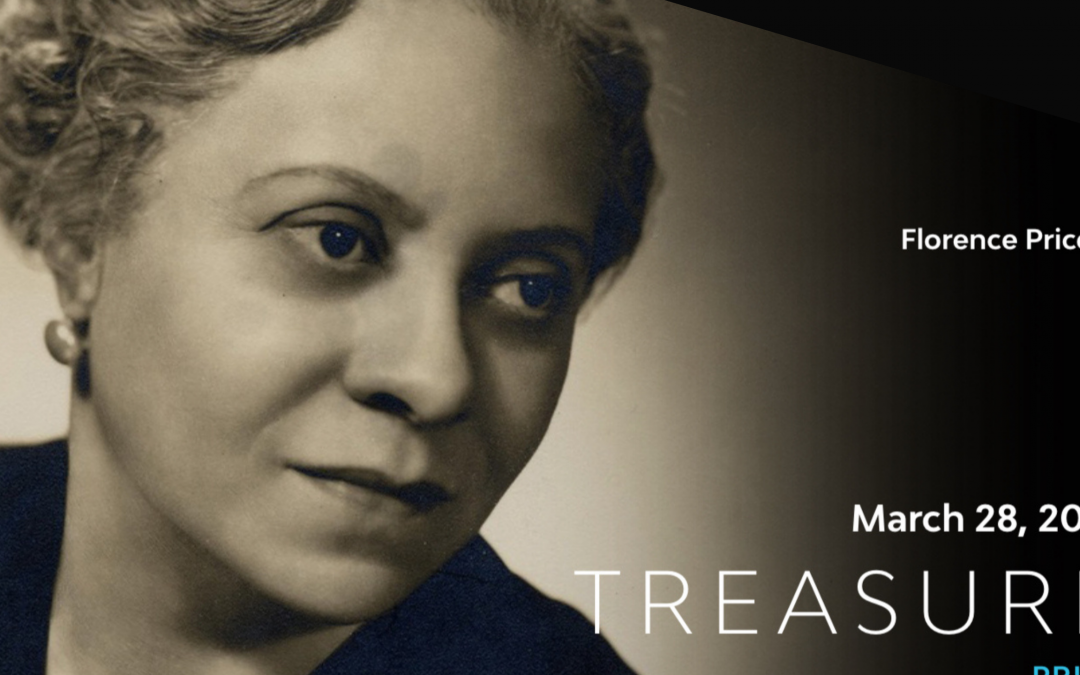 Florence Price (née Smith) (1888-1953) is a significant Black composer of concert music. Among her many other honors, Price was the first African-American woman to have a composition performed by a major orchestra (the Chicago Symphony).

She hailed from near Little Rock, Arkansas, where she graduated high school (as valedictorian) at the age of 14. Moving on to Boston’s New England Conservatory, she studied piano and organ, composing her first symphony and graduating with honors (1906) with a double major in organ and music education. Professor/Composer George Whitefield Chadwick continued to be a mentor to Price for many years. Returning to Arkansas, Florence taught at the college level, and in 1912, she married attorney Thomas J. Price. Together they had two daughters and a son.

To escape racial oppression, the Price family moved to Chicago in 1927. There Florence began a long period of compositional activity. Notably, her Symphony in E minor won a major award and was premiered by the Chicago Symphony Orchestra, Frederick Stock, conducting.

In 1931, the Prices divorced, and Florence soon moved in with her close friend, Margaret Bonds. At that point, Price’s most productive creative period began. In addition to orchestral, chamber, and piano music, she composed widely for the voice, leading to warm, valuable friendships with Black singers Marian Anderson and Roland Hayes. (Anderson would usually end her recitals with a Black spiritual as arranged by Price.) In 1964, Chicago honored Price (posthumously) by naming an elementary school after her.

The musical style of Price’s instrumental concert works is key-oriented, a holdover from the Romantic 19th century Other 20th-century composers who took this approach included Rachmaninoff, Sibelius, and Richard Strauss. Her frequent key changes and passages of thick, continuous counterpoint are reminiscent of the late-romantic, César Franck.

The opening movement (Allegro) of Price’s G-Major String Quartet (1929) is almost a textbook of her style: frequent key changes, a great variety of musical themes and shorter ideas that flow quickly from one to another. Key changes sometimes occur in the middle of musical phrases, sweeping the listener’s ear very quickly from one soundscape to another.

The second movement is actually an Andante moderato liked to an Allegretto finale. The theme of the Andante is informed by the style of American folk songs. The Allegretto that follows starts with a trio of free improvisations on that theme, first lyrical, then dominated by pizzicato, finally, like a folk dance. A variant of the theme as a waltz, starting in a minor key, leads to an apotheosis and the quartet’s bright ending.

It (almost) goes without saying: the music of composers like Beethoven and Brahms isn’t going anywhere. Cherished repertoire of the past will always have a welcoming space in the concert hall. That said, it is time to finally and fully celebrate the vibrant history of all women and all persons of color who have been the creators and performers of some of music’s greatest riches as a regular part of the concert going experience. We must endeavor to honor Florence Price as a pioneer and secure her place in the musical canon through a rigorous exploration of her music and a zealous advocacy for her legacy.

Edvard Grieg (1843-1907) composed only about a dozen chamber works, notably his three violin sonatas. By comparison, the body of art songs he wrote seems enormous. It comprises 70 opus-numbered collections and probably an equal amount of unpublished songs. In one of his published sets, Op. 25, which were settings of poetry by Hendrik Ibsen, he revived a musical idea that earlier had been the opening flourish of his Piano Concerto in A Minor (1868). The song, “The Minstrel’s Song,” was based on a Norwegian legend about water sprites who lure minstrels to their waterfalls with the promise of revealing the secret mysteries of music, but only at the cost of their happiness. The possibility that Grieg considered this song text to be relevant to his own life is shown in his own words, “I used the beginning of the song as the core motive in the string quartet that was composed a short time later,” coupled with his later comment on the quartet, “Herein lies . . . a bit of a life story. . . .”

At the premiere, the audience loved it, but the critics hated it. This situation caused problems getting the work published. However, the music continued to be a success, admired by both Liszt and Tchaikovsky. Grieg’s chief publisher finally had to give in with some embarrassment.

The “Minstrel’s Song” motive becomes a motto for the entire work, figuring into each movement. The dramatic first movement introduction leads to an agitated main theme, a contrastingly sweet second theme (subtly incorporating the motto), and a playful third. The development is characterized by heavy emotional contrasts, as the main ideas are worked out. A reprise of the themes brings no surprises, except that near the end a high melody in the cello sings out the second theme accompanied by trembling high strings — perhaps echoing a water sprite?

Titles of the last three movements reflect Grieg’s penchant for “character” music. The second movement is a romanze. Here is Grieg the tunesmith, pealing out a sweet, graceful salon-style melody. But what are these agitated episodes made more emotional by their reliance on the motto? If the quartet is truly autobiographical, this contrast might reflect some of the inner conflicts that plagued Grieg throughout his life.

The intermezzo, third movement, like many by Brahms, stands in place of a classical scherzo/minuet. Grieg’s music reflects the folk dances of his native Norway, heard especially clearly in the central section. Here is Grieg the nationalist at his best.

Following a slow introduction, quick saltarello rhythms animate the finale. The saltarello was a 16th-17th century leaping dance (which also informed the finale of Mendelssohn’s Italian Symphony). Grieg’s music is lively but not as wild as an Italian saltarello. It serves here to bring the quartet to a bright conclusion with the motto adding weight to both the pensive introduction and the lively coda.