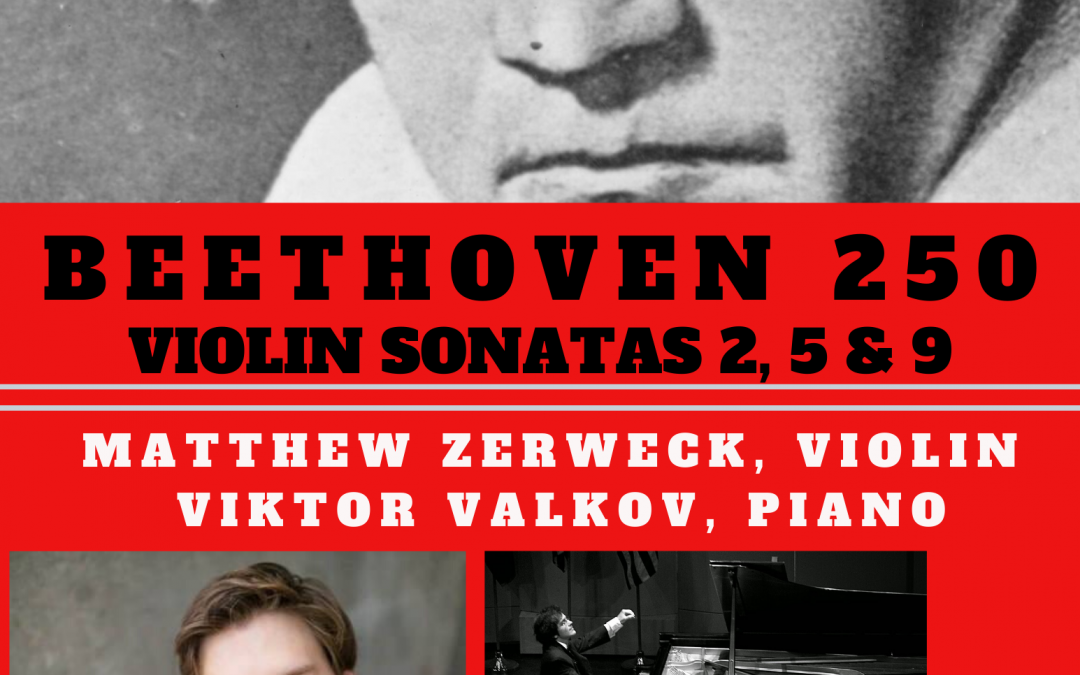 “It would be hard to imagine two more compatible musical partners than Mr. Zerweck and Mr. Valkov – compatible with each other and with Beethoven. Both revealed themselves to be fearless, ferocious musicians – at times, even frightening. They could be sweet and gentle when the composer insisted, but with a loosening of the reins they could rip your throat out. In a good way, of course.”

Read the rest of Mike Greenberg’s review of our Beethoven250 program here: http://incidentlight.com/Music%20reviews/camerata-zerweck-valkov-olmos-ensemble-soli-200221.html

When Beethoven’s first set of three violin sonatas (Op. 12) went on sale at the end of 1798, the musical world of Vienna was no more ready for them than it had been for his other music. A review of the sonatas written in June 1799 makes such statements as:

After having looked through these strange sonatas, overladen with difficulties . . . [I] felt . . . exhausted and without having had any pleasure. . . . Bizarre . . . Learned, learned and always learned — and nothing natural, no song . . . a striving for strange modulations. . . .

If Herr v. B. wished to deny himself a bit more and follow the course of nature he might, with his talent and industry, do a great deal for an instrument [the piano] which he seems to have so wonderfully under his control.

Such bad press obviously did not deter Ludwig van Beethoven (1770-1827) from his vision. In all, he composed ten violin sonatas spread over his first and second style-periods, including the famous “Kreutzer” Sonata (Op. 47). The last violin sonata was composed in 1812 and published as Op. 96.

“Effervescence” is the word for the A Major Sonata’s first movement. Only momentarily does Beethoven depart from the tripping-skipping of the first and second themes. In the exposition, the only “serious” departure comes after those themes — a momentary catching of the breath before the composer whirls off in a new direction. In the brief development, Beethoven maximizes his small collection of ideas, and in the recapitulation, he extends them in a post-development that flies into a new key before a final landing in A major and a delightful coda.

“Dialogue” would be a good descriptor for the Andante. Interchanges of similar phrases between piano and violin characterize the lyrical outer sections. In the center, however, the two instruments become more closely entwined. Nineteenth-century writer Friederich Niecks commented that “the charm of the movement lies in its simplicity and naiveté and in the truth of its tender, plaintive accents.”

“Scherzo” might have been Beethoven’s appellation for the final movement, had he chosen that form. It has all the good-humored flavor of the best of Beethoven’s scherzos, and the composer himself used the word piacevole (pleasing) in the tempo marking. Following tradition, the movement is a rondo that presents the sunniest of themes, appropriately completing this “feel-good” sonata.

It may be altogether too glib to say that Beethoven anticipated or pioneered every major musical development of the Romantic age that followed him. Yet, when listening to his aptly nicknamed “Spring” Sonata, the notion is tempting. Here, in a nutshell, Beethoven presents a pre-echo of the heartfelt spirit, naivety, and boldness of Mendelssohn and Schumann — as well as elements of their melodic and harmonic vocabulary.

The first movement is particularly illustrative. In its opening, we have the innocent freshness of a Mendelssohn, heard in melodious themes given first to the violin and then answered by the piano. A short development leads to the unprepared and surprising recapitulation. Now, the harmonic color of the principal themes is tinged with the pathos of experience, but the spirit of pure joy returns in the sumptuous coda.

The Adagio is more comparable to Schumann in its harmonic richness and full, pianistic textures. However, chamber music authority W.W. Cobbett maintains that the opening theme of this five-part form “seems to have escaped from some opera by Mozart.”

The very brief Scherzo movement turns again to a Mendelssohn-like spirit. Its elfin violin elody. However, it is accompanied by offset piano rhythms that could have come only from Beethoven’s pen.

Over the rondo finale, the big-hearted Schumannesque spirit hovers again, although there are occasional winks in the direction of Mozart. In contrast with the opening movement, the piano is usually the leader and the violin the follower in presenting new themes. One Beethovenian feature in the harmonic plan is a false recapitulation in the key of D major, which then slips deftly back into F major for the concluding sections.

Beethoven composed the “Spring” Sonata in 1800 or 1801 and published it in the latter year alongside the Op. 23 Violin Sonata (no. 4). Much of the youth, vigor, and studied innocence of the “Spring” Sonata may be attributed to the early period in which the work was written. This was the time of Beethoven’s “Pathétique” Sonata for piano and the First Symphony, but a time before he fully realized (or admitted) his loss of hearing. Thus, with this sonata we might imagine Beethoven standing at the brink of the future. It is also easy to imagine this happening on a bright, sunlit day with a spring breeze wafting through the young master’s hair.

It seemed that entirely new impulses, new possibilities, were revealed to me in myself, such as I had not dreamed of before. Such works should be played only in grave, significant conditions, and only then when certain deeds corresponding to such music are to be accomplished.

These are not the words of Ludwig van Beethoven (1770-1827) nor of Kreutzer, but rather of Tolstoy’s tragic hero in the novella, The Kreutzer Sonata, where a performance of this sonata drives him over the edge of insanity, and he kills his wife. Fantastic as that notion seems, it is imaginable through the unrestraint of the first movement and the excitement of the last. However, none of that was Beethoven’s intention. He composed the “Kreutzer” Sonata in 1802-1803 just ahead of the “Eroica” Symphony. This was a turning point in Beethoven’s style, the entry into his “Heroic Decade,” to use Maynard Solomon’s expression.

This violin sonata was the longest written to date, just as the Third Symphony would be the longest of its genre yet heard. And, just as Beethoven changed the dedication of his symphony, he re-directed the dedication of the sonata. Originally, Beethoven wrote the work for George Bridgetower, with whom he premiered the music in 1803. However, the two subsequently fought over the attentions of a woman. Beethoven then used the sonata as a political tool for his proposed (but never accomplished) move to Paris by dedicating it to the French virtuoso, Rodolphe Kreutzer. Ironically, Kreutzer never performed the sonata, finding it, in the words of Berlioz, “outrageously unintelligible.”

Although that was an exaggeration, many violinists have found the first movement to be awkward. Another feature that may have put off Kreutzer is the equal prominence of the piano. In the sketches, Beethoven made the notation, “in a very concertante style, somewhat like a concerto.” But it is a concertante for both violin and piano: a concerto without orchestra.

Beethoven begins with the only slow introduction among the ten violin sonatas, and he periodically returns to Adagio in the course of the first movement. “Feverish,” “fiery,” and “passionate” are terms often applied to the Presto that follows. Beethoven seems to have created a contest for superiority between the two instruments, and only in the heat of the development section do they achieve true parity.

The theme and variations in the second movement are a complete contrast. Here, Beethoven reminds us that violin sonatas were originally salon or drawing-room music. The theme and first two variations follow that idea; however, the fourth (in the minor mode) is music of somber introspection. A final decorative variation and quiet coda round out the movement.

In his haste to complete this sonata for its premiere, Beethoven used for his last movement the discarded finale from the Violin Sonata, Op. 30, no. 1 (which it would have overbalanced). This galloping tarantella puts the sonata into a whirl that balances the first movement in length and emotional values. Slowing only occasionally, the motion of this music is relentless, driving breathlessly to a tempestuous finish