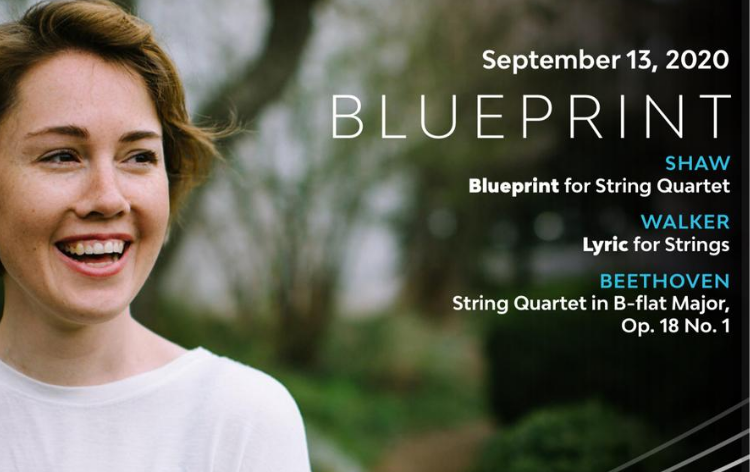 The youngest composer ever to be awarded the Pulitzer Prize in Music is Caroline Shaw (1982- ). At age 30, she received this honor for her a cappella vocal work Partita for 8 Voices. In addition to composing, Shaw is active as a violin soloist, chamber musician, and ensemble singer, chiefly with the group Roomful of Teeth, for whom she composed Partita. Her recent commissions include works for Carnegie Hall, the Guggenheim Museum, the St. Paul Chamber Orchestra, and mezzo-soprano Anne Sofie von Otter. She has also collaborated frequently with Kanye West. Shaw has studied at Princeton, Rice, and Yale Universities.

Shaw most often composes for a particular artist or ensemble, crafting her music to a degree on aspects of the artist/ensemble revealed through personal encounters. Blueprint was composed for the Aizuri Quartet, which played its world premiere in April 2016 at Wolf Trap Vienna, VA). The title of this seven-minute work uses that quartet’s name as a springboard for Blueprint. However, the work also relates closely to an early string quartet by Beethoven. As Shaw explains:

The Aizuri Quartet’s name comes from “aizuri-e,” a style of Japanese woodblock printing that primarily uses a blue ink. In the 1820s, artists in Japan began to import a particular blue pigment known as “Prussian blue.” . . . The story of aizuri-e is one of innovation, migration, transformation, craft, and beauty. Blueprint, composed for the incredible Aizuri Quartet, takes its title from this beautiful blue woodblock printing tradition as well as from that familiar standard architectural representation of a proposed structure: the blueprint. This piece began its life as a harmonic reduction — a kind of floor plan — of Beethoven’s String Quartet, Op. 18, No. 6 [“La Malinconia”]. As a violinist and violist, I have played this piece many times, in performance and in joyous late-night reading sessions with musician friends. . . . Chamber music is ultimately about conversation without words. We talk to each other with our dynamics and articulations, and we try to give voice to the composers whose music has inspired us to gather in the same room and play music. Blueprint is also a conversation — with Beethoven, with Haydn (his teacher and the “father” of the string quartet), and with the joys and malinconia of his Op. 18, No. 6.

George Walker (1922-2018) is one of America’s most distinguished Black composers. Educated at Oberlin and Curtis conservatories, the Eastman School of Music, and Fontainbleau, Walker studied composition with such notables as Gian-Carlo Menotti and Nadia Boulanger, and piano with Rudolph Serkin and Robert Casadesus. Having taught in several major schools of music, Walker held chairs in composition at Rutgers University, the University of Delaware, and the Peabody Institute. He has also won two Rockefeller fellowships and a Guggenheim Fellowship. In 1982, Walker was made a member of the American Academy and Institute of Arts and Letters. In 1996, Walker was awarded the Pulitzer Prize in Music for his symphonic work, Lilacs, based on poetry by Walt Whitman. He was the first African American to be honored with that award.

In Walker’s adaptation for string orchestra, Lyric became the most often performed work by an American composer. About the music, Walker has written:

It was composed in 1946 and was originally the second movement of my first string quartet. After a brief introduction, the principal theme that permeates the entire work is introduced by the first violins. A static interlude is followed by successive imitations of the theme that leads to an intense climax. The final section of the work presents a somewhat more animated statement of the same thematic material. The coda recalls the quiet interlude that appeared earlier. Lyric is dedicated to the memory of my grandmother.

Program annotator William D. West has noted certain parallels between George Walker’s Lyric for Strings and Samuel Barber’s Adagio for Strings. Each was originally the slow movement of its composer’s first string quartet, and both are elegiac pieces expressing an underlying sorrow. West writes:

The poignancy inherent in Walker’s thematic material, and the way he builds it to a searing climax half way through, may also suggest a profound grief, and in this case, of course, we know the connection with the passing of his grandmother. Appropriately, since this is a very personal memorial, the music in the string orchestra version remains intimate throughout, the equivalent of a personal letter which takes us briefly and succinctly into the private and confidential world of the sender.

The six works of Op. 18 represent Beethoven’s first burst of energy in the direction of the string quartet. At the time of writing (1798-1800), Beethoven had many occasions to experiment with the medium and to hear his music when the ink was barely dry. He regularly attended the quartet sessions of Prince Lichnowsky and Emmanuel Förster, a composer who exerted a degree of influence upon young Beethoven. There, a group of musicians was placed at Beethoven’s disposal, giving him opportunities rarely afforded a composer.

Ludwig van Beethoven (1770-1827) composed the F Major Quartet second in the series, but he placed it at the head of the set because of its size and impressiveness. This work stems from 1799, and Beethoven dedicated its initial version to his friend, Karl Amenda. Two years later, the composer revised it with the statement, “I have just learned how to write quartets properly.”

The most impressive feature of the first movement is its initial “turn” motive. Beethoven intensively experimented with different versions of this idea, covering no fewer than 16 pages in his sketch books. At last, he devised a motive that music scholar Joseph Kerman says “behaves like a coiled spring, ready to shoot off in all directions. . . .” Although this motive dominates the movement with its 104 occurrences, there is a rich abundance of other thematic ideas. Kerman states that the movement’s mood “owes much to the perilous effort of holding all this material together.”

Beethoven did not give “names” to much of his music, but he occasionally had some extra-musical idea in mind. At the end of one sketch of this quartet’s Adagio, Beethoven wrote, “les deriers soupirs,” “the last breaths.” Reportedly, he interpreted this to his friend, Amenda, with the words, “I thought of the scene in the burial vault in Romeo and Juliet.” Broad theatrical emotion is rampant throughout the movement, but especially in the development, which romanticizes its themes as no quartet ever had before.

The size and emotional range of the Scherzo are slight in comparison with the preceding movements. However, as a witty respite, it works well. In the Trio section, a “limping” motive, adds a humorous touch.

Beethoven inherited from Haydn two responsibilities for the finales to early works such as this: They must be effervescent, and they must be sharply rhythmic or dance-like. The finale to the F Major Quartet fills both requirements — and then some. To balance the magnitude of the first movement, Beethoven here provides a lengthy sonata-rondo form with well-contrasted themes. The verve and directed energy of this finale provide an appropriate finish to a monumental accomplishment in chamber music.