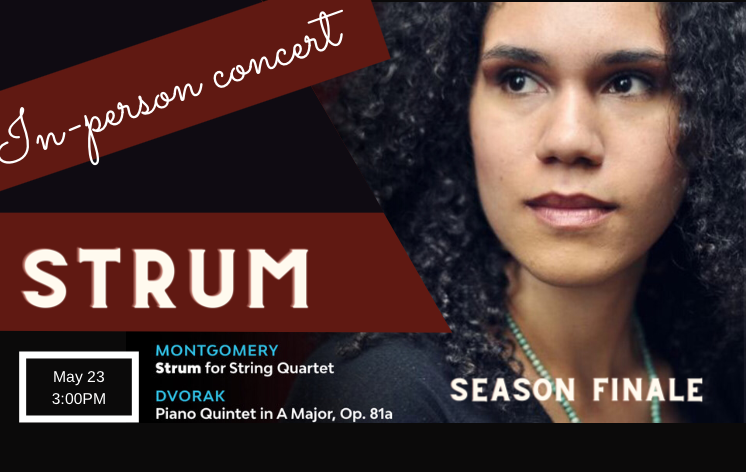 Composer-violinist-educator Jessie Montgomery (1981- ) hails from New York’s Lower East Side, where her father managed a music studio. She was, in her words, “constantly surrounded by all different kinds of music.” Thus, her own compositions have drawn from many diverse influences, such as African-American spirituals, civil rights anthems, improvisational styles, modern jazz, film scoring, etc. From those early years, she developed, chiefly as a violinist, to receive degrees from the Juilliard School and New York University. In her professional performing life, Montgomery has been a member of the Providence String Quartet and the Catalyst Quartet. The latter began as a project of the Detroit-based Sphinx Organization, which creates opportunities for African-American and Latino string players.

As a composer, Montgomery was the resident Composer-Educator for the Albany Symphony during the 2015-16 season. In addition she has been recognized with grants and fellowships from the American Composers Orchestra, the Sphinx Organization, the Joyce Foundation, and the Sorel Organization. Her reputation has been spreading steadily, mainly in North America, beginning in New York City, Providence, and Boston, reaching out to Deer Valley, Utah; Miami Beach, Florida; Birmingham, Alabama; and Toronto, Ontario. Montgomery’s debut record album Strum: Music for Strings was released on the Azica Records label in late 2015. The concluding album track is Strum.

This one-movement work was commissioned by Community Music Works and premiered by the Providence String Quartet in 2006 and was revised in 2012. About the music, critic Maggie Molloy writes:

Strummed pizzicato lines serve as a texture motive across all four instruments, creating a rhythmic vitality which propels the piece forward from its nostalgic first moments all the way through to its ecstatic and dramatic ending. Layered rhythms and harmonic ostinati round out the piece’s warm, dancelike spirit, crafting a joyous and hopeful ending. . .

“This work probably epitomizes more completely the genuine Dvořák style in most of its facets than any other work of his.” (John Clapham)

“ . . . One of the most delightful and successful chamber works, not only in the composer’s works but also in the whole of chamber music composition.” (Otakar Šourek)

“ . . . The best piano quintet ever written, demonstrating as it does from start to finish some of the most lovable characteristics of a lovable composer.” (Gervase Hughes)

With accolades like that, there is very little to add except the bare facts. Having attempted, unsuccessfully, to improve his First Piano Quintet, Op.5 (also in the key of A major), Antonín Dvořák (1841-1904) decided to start afresh. He began Op. 81 in mid- August 1887, and by mid-October the new quintet was completed. It was a period of contentment for Dvořák, and he worked in a pleasant environment. Once finished, Dvořák dedicated the new work to Dr. B. Neureutter, a generous patron of music. The premiere took place the following January, and Simrock published it immediately.

The first movement displays a wide expanse of moods generated from its two themes, both essentially song-like. These moods alternate rapidly during the development and keep the entire movement fresh and spontaneous.

The second movement bears the title Dumka, a kind of melancholy Slavonic folk ballad. In the hands of Dvořák, however, the Dumka involves sudden mood changes from melancholy to exuberance. That is what happens in the middle section of this rondo, when the rhythmic Vivace section springs up.

Although Dvořák gave a subtitle of Furiant to the Scherzo, it is not a genuine Furiant, since there are no predominating shifts of accent. However, every bit of the movement is Slavonic. Interestingly, the Trio section contains chiefly ideas from the main Scherzo theme.

The finale is a bustling movement in sonata form carrying an exhilaration that counterbalances the earlier melancholic moods. From the perky first theme to the last note, the movement is full of rustic fun. Dvořák’s mastery of every feature found in the quintet turn it into what Hughes has called “no less perfect a work of national art than the Dumka itself.”

Review: Throwing Caution to the Wind

“Composed in 1843, Schumann’s pioneering work — the first major piece to combine piano and string quartet — remains one of the most commanding peaks of Romantic chamber music. Visiting and local ensembles have performed it several times hereabouts in recent years, always with a cautiousness that left too much of the music’s overflowing life on the page.

But this performance spread its wings and soared as I’ve never heard it before. The manic opening allegro, the giddy, propulsive scherzo and the bold finale were fleet, agile and seamless, compelling from first to last. In the funeral march, the repeating rhythmic pattern took on a death-rattle chill. Mr. Valkov’s crisp diction, deeply etched rhythms and brilliant technique contributed immeasurably to the results and perfectly complemented the string quartet’s taut precision and big, radiant sound. The whole came off as surprisingly contemporary, as if this 19th-century piece would have been just as much at home in Sam’s Burger Joint as in a traditional concert hall.”

“The current roster …[is] the strongest in Camerata’s history, and the intervening years have forged an increasingly cohesive, spirited and intelligent ensemble, now fully equal to the best string quartets on the international circuit.” Read more at incidentlight.com http://incidentlight.com/Music%20reviews/camerata-san-antonio-las-americas-160112.html